I officially began training on my new bike today.  I picked it up from Ziggy's last week as well as a pair of biking shorts, a pair of Shimano SPD bike shoes, and a bike computer.  I also spent about an hour and a half getting a professional fitting to make sure I'll be comfortable and efficient on my long rides.

It's still a little cool outside, so I put my bike on a trainer.  According to the computer, I did 10 km in just under a half hour with an average speed of about 22 km/h.  That was a little disappointing, but I had set the resistance on my trainer to one of the highest settings, so it was probably the equivalent of biking uphill the whole time.  Hopefully I'll do better when I actually hit the road.

Posted by Mike Vander Ploeg at 18:21 No comments:

Have you ever been stereotyped?  People have often seen me as a math nerd or "a computer guy", and seem to be surprised whenever they see me performing well in any kind of sport.  I'm just a smart guy and shouldn't be very good at physical activities.

However, a little while ago, I realized that the person who stereotyped me the most was actually me.  I was putting limits on myself, thinking "that's not my kind of thing" or "that's not the sort of thing I'm interested in".  After thinking about this some more and talking with other people, I realized that the limits I was putting on myself were motivated by fear and pride.  I was afraid of trying something and failing, which is hard on the ego.  There were a lot of things I knew very little about and I was afraid that if I tried them, I would fail.

Even more than that, I often tried to turn my ignorance and fear into a moral strength.  I convinced myself that I didn't do certain things because they were beneath me; that there was something inferior or possibly even sinful about them.  For example, I used to put very little effort into my physical appearance, keeping a simple hair style and buying cheap, neutral-looking clothing.  I looked down on people who spent lots of money on clothes or spent a lot of time every morning in the bathroom perfecting their appearance.  I wasn't vain like they were.  However, the truth was I didn't know how to dress well or look sharp, and was afraid that if I tried, I'd look ridiculous, and everyone would be laughing at me behind my back.  For the last couple years I have been spending a little more on clothes, trying to dress more stylishly, and have been experimenting a little with hair styles.  I may fail on occasion and look a little silly, but I'm trying not to let my fear or pride get the better of me.

I've also been trying some new athletic activities.  For example, last year I gave running a try.  I hadn't done any long distance running since grade school and always used the excuse that my knees weren't very good.  However I decided to stop using excuses and just do it, and by the end of the year I was able to participate with my brothers in the CIBC Run for the Cure, a 5 km run to raise money to fight breast cancer 1 (my mother's a breast cancer survivor).  Now, my knees usually hurt whenever I run downhill, so there's a limit to how much running I'll be able to do, but I enjoy it far more than I thought I would and can't wait until warmer weather arrives so I can go out some more.

I also took up weight lifting a couple years ago.  Five years ago I would have said that that was only for "dumb jocks", but the truth was that I never considered myself very strong and figured I would just embarrass myself if I tried to lift any weights.  Truthfully, when I started doing it, it was a little embarrassing how little I could lift, but now, even though I'll never compete in any kind of weight lifting competition, by working at it consistently, I've made some very good progress.

This blog is another example.  I love reading, but writing has always been a challenge for me.  I've always struggled to put my thoughts into words.  I'm not always satisfied with the words I've written and I'm not sure that I've communicated what I wanted to say very well, but you don't grow without pushing yourself.

Biking across the continent is something the old me would never have considered.  It represents a significant physical challenge and will be a great achievement and something I'll always be proud of. There is a chance that I won't make it all the way (a very small chance, so don't let that stop you from sponsoring me), but I'm not going to let that stop me from trying.  I'm in good shape, so with some serious training, I shouldn't have any problem doing it.

What about you?  Are you limiting yourself because of your fear or pride?  Is your disinterest or disdain for certain things actually motivated by a fear of failure?  Don't put limits on yourself, but push yourself; try something hard, something you're not sure you'll be able to do.  You may be surprised by what things you'll enjoy or become good at.  I won't lie to you, though: there is a real risk of failure, but even then you will gain humility which is something we all need more of.


1 In case anyone is wondering: I won.  People may say it's just a run to raise money for charity, but when three guys run together, it's no longer just a run, it's a race.  Are you boys up for a rematch this fall?   Let's see if you can take me this year!

Last week I purchased a bike for the tour, the 2012 Cannondale Synapse Carbon 4 Rival.  It's last year's model, and Ziggy's, where I purchased the bike from, offers a 10% discount on bikes that will be used for charity rides, so I was able to get the normally $2900 bike for only $1900.  It's a carbon frame, so it's unbelievably light and it's very comfortable since the frame absorbs most of the bumps in the road.  I'm very excited about it! 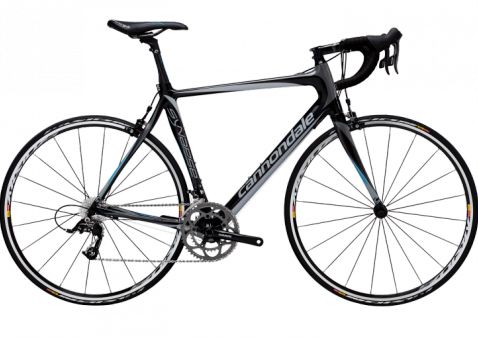 Posted by Mike Vander Ploeg at 19:03 No comments: