Friday - We came the closest to my house today.  For the last half of the route we were on roads that I had either biked or driven many times before.  It's really exciting to be so close to home again.

About halfway through the ride I was met by two coworkers, Mike Paola and Dave Wellstood, and we rode together for a while.  At one of the SAG stops, they had taken out the Welcome to Canada sign that they had for us when we crossed the border, so we took a picture in front of it. 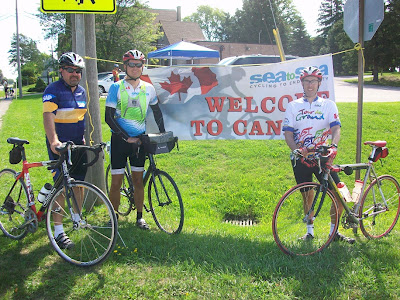 I went slightly off route when we rode through Cambridge so I could get my first official Tim Hortons donut for the tour.  Someone brought some timbits in Imlay City, but those don't really count -- they were really just a foretaste of what was coming.  It was a very tough decision, but I decided to go with an apple fritter.  They taste great and because they have fruit in them, they're healthy too. 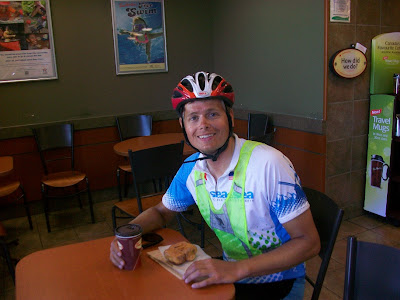 Shannon's dad Hugo picked a few of us up and brought us to her house in Kitchener.  She gave us a tour and then we hung out there for a little while rehydrating with some refreshing beverages provided by Hugo.

After dinner back at the school, one of Shannon's friends, Jonathon Hunse, brought us to another friend's house where they had a small party for Shannon with a few other couples from her church.  More refreshing beverages were served along with some great desserts.  I knew one of the other couples -- Dave and Cara DeHaan; I work with Dave and went to high school with Cara.  It ended up being a bit of a late night (I can't believe I'm calling 11:00 pm late), but we all had a great time.