Friday - We had a great ride today along the St Lawrence River with beautiful weather -- sunny and cool.  For an extra challenge, a time trial was set up between the first and second SAGs. We would each leave the first SAG one minute apart so we couldn't draft off each other and our start time would be recorded.  There was someone else at the second SAG who would record our time when we got in. It was 26.2 km between the SAGs and about 40 cyclists joined in.  My recorded time was 43:55 which gives an average speed of 35.8 km/h and placed me about the middle of the pack. 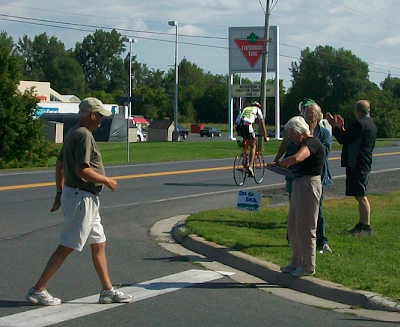 Tonight is our last night in Ontario.  Before entering Ontario we were warned that we would be eating our way across the province and that has certainly turned out to be the case.  Almost every day we've had churches set up rest stops along the way with refreshments and goodies, often two or three churches a day.  A few times, churches have even come into camp and served us dinner or deserts.  We've frequently passed people waiting for us, waving and cheering as we passed.  Riding through Ontario was been an absolute blast!