Some people ride alone, but most of us ride in groups of two or more.  I've been in a group of nine a couple times, but that really is too big.  It's a lot harder for motorists to get around such a large group and you'll probably need to stop more often, since you have a greater likelihood of someone having a problem with their bike, like a flat.  I think groups of three to five are ideal.  For days with lots of climbing it's harder to stay in a group because everyone takes hills at their own speed.

We are given a turn-by-turn direction sheet at the previous night's peloton meeting and all our turns are marked with big yellow C's on the road with an arrow pointing in the direction we need to go.  It's not too hard to stay on the route if you're paying attention, but occasionally riders miss the turn and need to be flagged down.  I don't believe we've had any ride go more than a couple miles off track.

Every 20 km or so we have a SAG (support and gear) stop setup by one or two of the volunteers.  They provide us with cold water, water mixed with electrolytes, fresh fruit (apples, oranges, bananas, and watermelon), a couple chairs to sit on to rest, and, on hot rides, towels soaked in ice water to cool us down.  They really are a great help -- we wouldn't be able to make it through the day without them. 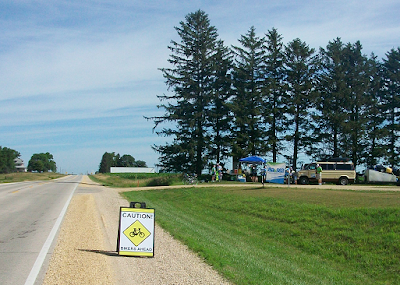 We typically role into camp sometime between 11:00 am and 3:00 pm, depending on the length and difficulty of the ride and how many stops we make along the way.  The kitchen staff usually has a table setup with cold water, lemonade, and ice tea, as well as a few snacks like chips and yogurt.  We typically camp at a school or a park, though occasionally we've stayed somewhere more exotic, like a golf course and a winery.