Saturday - Although today was a shorter ride than yesterday, we had to fight a head wind the whole way, which made it a long, tiring ride.  About three quarters of the way I came close to bonking (cyclist term for hitting the wall).  My legs hurt, my back hurt, my knees hurt, and I felt completely spent.  After some urgent prayer, a rest at a SAG stop, and some food, I started feeling better and was able to complete the ride.  I was riding with Marc and Rachel who graciously slowed down for me and allowed me to draft off of them.

This weekend we are staying at the city park in Fairbury, Nebraska.  It was a little eirie walking around the downtown because it was so empty and lifeless, particularly for the middle of a Saturday afternoon.  If felt like walking through a ghost town.  However, we found a nice Mexican restaurant, and a bowling alley where about thirty of us went for bowling and beer after supper.  It was a great way to unwind after a long, tiring week. 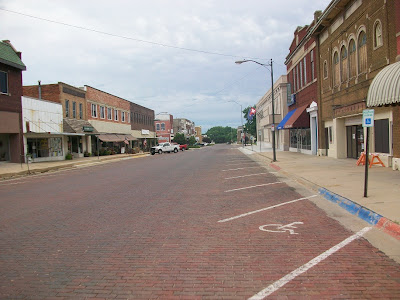