Thursday - We had a really nice ride today.  We're in the middle of a valley surrounded by mountains and spent the day riding straight across to the other side.  I don't think the road we rode down deviated by even a degree to the left or right toward the pass at the other end.  This is basically what we looked at for the first two-thirds of the trip. 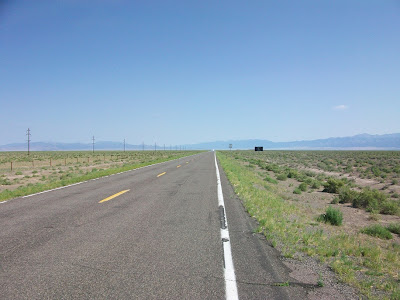 We then went through a pass of about 1500 ft, not nearly as difficult as yesterday's.  The climb was pretty gradual, but the descent on the other side was pretty rapid which was an absolute blast!  I reached 73.9 km/h, which is a new record for me, but I'm a little disappointed now that I didn't hit a higher speed.  A number of riders surpassed 80 km/h! 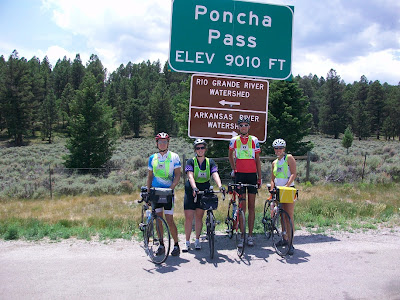 At the bottom of the hill was a great little pub that served two dollar beers.  A large number of us congregated there to compare stories about the descent.  Sadly, after leaving, I had my first fall.  As soon as I put my foot in the pedal it clipped in (it usually takes me a few seconds to clip in) and I was still in my highest gear from the descent, so I couldn't turn the pedals.  Unfortunately, because it happened just after we left the pub, people started claiming I couldn't hold my alcohol, but I had only had one beer (remember, this is American beer we're talking about).  The only thing damaged was my pride.

The long rides we've been having are starting to take their toll.  My legs are sore and my butt feels bruised from sitting on a hard saddle for so long.  Thankfully, the next couple days should be a little easier and then I'll have Sunday off.