Saturday - I completed my first American century -- 100 miles (160 km)!  When we rolled into camp, the American in our group said we were only at 99 miles, so we circled around on some nearby streets to reach 100.  I also set a new personal speed record during the ride: 73 km/h!

Just before we left this morning, Al, the tour manager, announced that yesterday's storm had washed out the road we were going to take so the ride had to be cancelled.  After he consulted with a local and with a state trooper, it was decided we could proceed with the ride.  Part of the highway was gone, but we were able to walk our bikes across the part that was still there. 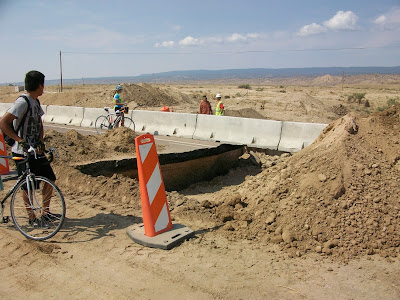 After dinner, a group of us thirty-somethings (see picture in previous post) skipped the evening meeting (I hope none of the tour organizers are reading this) and got a ride into Farmington to find a place that serves pie to celebrate Rachel's birthday.  Although, they didn't have strawberry pie, which is her traditional birthday treat, we all had a piece of pie and sang happy birthday to her as the waitress came out with her strawberry cheesecake with a lit candle