Monday - I rode with Peter Visscher today who's riding for the week and we were joined by Adam (see post for day #12) at the first SAG.  We rode pretty hard and only one rider beat us into camp.
Shortly after we left the third SAG we were passed by a hay baler going about 40 kph.  We quickly snuck in behind it and were able to draft behind it for almost 30 km.  Although we had to work hard to keep up when going up hill, the rest of the time we cruised at about 40 kph with very little effort.  It was pretty awesome. 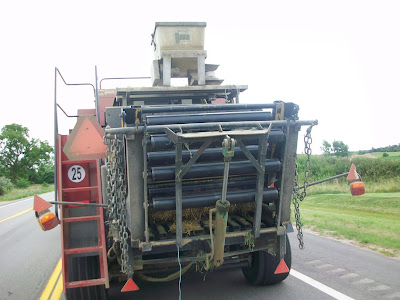 Marc marked the route today and added a number of humorous messages along the way.  When a town limit sign was in sight, he marked "sprint" on the road and we raced to see who can reach the sign first.  I won most of the races in my group, but that was probably only because Peter didn't know what the game was, and I usually saw the "sprint" sign first so I got a head start.  We had a lot of fun on the ride today.

Since we got into camp early, I used the extra time to do some bike maintenance.  I cleaned the frame, cleaned and relubed my chain, and replace both my front and bake tires, which were really showing the miles and had a fair number of gashes and punctures.